How can I determine the gender of anime bloggers?

Due to recent event in the blogsphere which I would not go into details, I became curious about how readers and fellow bloggers pictured me. More specifically, how many took me for a male blogger and how many thought I was a female blogger?

When I thought about it, every blog I read would automatically leave certain impression of the blogger’s gender on my mind. Of course, I never consciously wonder which gender the blog author was. But when I had to write comments or talked to that blogger, I just assumed that the blogger was either male or female based on my own impression. I believe we all made our own assumptions on the bloggers who do not clearly display his/her gender.

How did we get that impression of gender from each anime blog we read? This is the question I’ll try to answer in this post. The information posted here was based on my own observation and from online documents about computer-mediated communication which focus on blogs or similar platforms. To make things simple, I’ve summarized the features that might help distinguish blogs written by male and female authors into one table below. 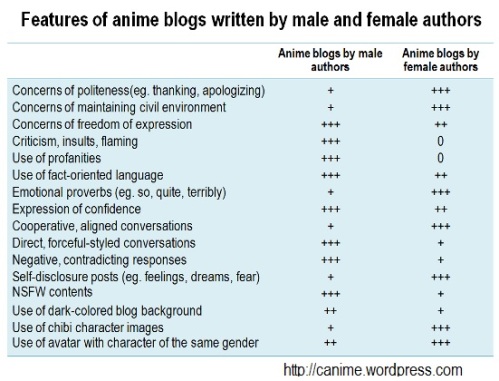 You may have noticed by now. Most of the features listed above were similar to features that were characteristic to each gender in general modes of communication. Men often utilize resolute, confident and direct conversations including criticism. Women were more compromising and friendly. Men might have tendency to break rules while women cared more about politeness. Stuffs like that. Blog appearance also played a big role to the impression of gender as darker-colored blogs gave more masculine impression.

To support this observation, I now give you some example of anime blog post that showed typical features of male and female authors. Important note: the blogs I mention here are all brilliantly written works which I absolutely admired. I have no intension to create negative impression to these blogs.

These examples are the ones that we knew instantly the gender of the bloggers. But of course, these features could be very far from accurate when used on anime blogs in general which often displayed a mixture of features from both genders. Some blogs could show extremely contrasting features to the actual gender of bloggers. Some example in this case included kluxorious or Chikorita157’s blog. Even my blog is very ambiguous for that matter.

Now for the most important part, everything written in this post was mostly for fun. I hope this post may help us get clearer picture about how we look at anime blogs. But I tell you now. Gender of anime bloggers does not and should not matter at all. The really important thing is the quality of that blog which is the work of our fellow bloggers.

I am no expert in linguistics or social science. So the content of this post maybe academically sloppy. If you have suggestions, additions or corrections, you are most welcomed to share it here. Thank you.

ps. I have been held up by the up-coming board examination and work-related stress which resulted in my slowed activity. This may last for a while but you can be assured that my passion for this blog remains strong.

70 responses to “How can I determine the gender of anime bloggers?”