The Book of Bantorra: anime review – It’s about Hamyuts Machesa…no, it was Mesata…or was it Meseta?

I think a lot of people believe that characters with too generic names can be easily forgotten. So some anime/manga names its characters with exotic names. The Book of Bantorra was one such anime. I had difficult time getting familiar with these strange names like Hamyuts Meseta or Mirepoc Finedel. But as the series progressed, I started feeling that these names sounded kind of melodic and charming. Not that I would judge anime by its characters’ name, of course.

Book of Bantorra grasped my attention almost immediately by its unique setting. It was undoubtedly a fantasy anime with healthy addition of medieval action and probably steampunk theme. It wasn’t easy to clearly define Bantorra’s universe but it was definitely cool. In this universe, when a person died, he turned to stony ‘book’ which held all that he was in it. These books were kept in Bantorra library and were guarded by the powerful armed librarians. Armed librarians were also sent out around the world on various dangerous missions, presumably as keepers of the peace and books.

The anime dealt with a large group of characters. It was separated into small arcs. Each arc focused on different armed librarian and the story arcs did not appear in chronological order. Yes, that meant the anime could be quite puzzling at first while the main plot slowly and subtly developed. Like several other sci-fi/fantasy anime, The Book of Bantorra took its time to grow and the audiences were required to pay attention to details and be patient. The only thing that kept the story moving, especially in the first half of the series, was the characters.

These characters were great! And the most awesome thing about them was that most of them were not even likable. The armed librarians were not your straight-forward fairy tale hero. They were all grey characters. Some were more honorable than others while some were downright despicable (yes, I’m referring to Hamyuts, among many others). They were all driven by their own desires and ideals. With these diverse characters, the anime could easily toy with the viewers’ feelings. We might hate the character at the beginning and end up feeling sympathetic towards them at the end or vice versa. I think it was amazing. 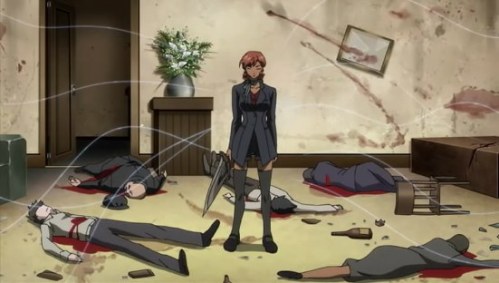 [SPOILER!] The final story arc dealt with the founding of Bantorra library and Hamyut’s origin. There were several great action sequences and the return of people who had died earlier. I always have a soft spot for this cliché (bringing the dead back for the last time) and this anime had portrayed this characters so well that I could not help but be happy to see them again. It was a cliché-ridden but heart-warming ending nevertheless. Iriea Kitty was so awesome in the last episode that I wish they would give me more of her back story. Despite the said awesomeness, I was not very satisfied with the truth behind the founding of the Library. To be more specific, I thought Ruruta-Nieniu arc was kind of ridiculous (to think that the world was almost destroyed because of this love couple’s quarrel). The final message from the Book of Bantorra was similar to other shows before it; the world is not perfect but there are lots of things in this world worth protecting. 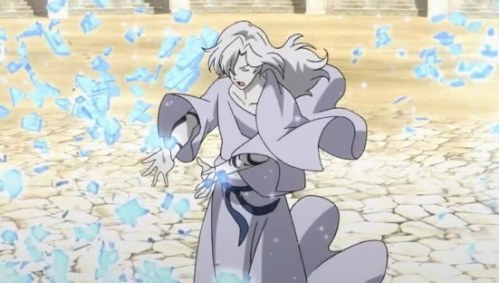 Unfortunately, Book of Bantorra’s production left a lot to be desired. Animation wise, it was full of stiff movements and lazy shots. The CG sequences also fell below general standard. The music sound interesting at first but the few themes this show has is used exhaustively again and again until I get bored during the later part of the show.

Conclusion: Book of Bantorra had great concept and characterization was the strongest quality of this show. A little more polished script would have worked wonders for better continuity of storytelling between arcs. Though the production quality was a big letdown, the anime was still worth watching especially for action/fantasy fans.

This entry was posted in Series and tagged Book of Bantorra, Tatakau Shisho. Bookmark the permalink.

4 responses to “The Book of Bantorra: anime review – It’s about Hamyuts Machesa…no, it was Mesata…or was it Meseta?”