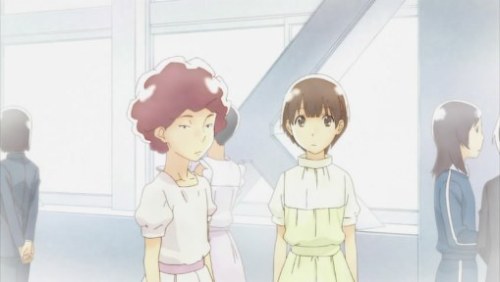 A boy who wants to be a girl

Traditionally, when writing a story, the author often tried to use the ‘everyday type of guy’ as the protagonist in order to be able to easily connect with the majority of audience. This was where the slice-of-life stories could be creative. Since slice-of-life stories tended to be character-driven, these characters were the story. With that said, having the lead character as a cross-dressing boy was quite a bold move which warrant some compliment.

Wandering son was structurally similar to most slice-of-life, coming of age anime, but with an additional subject of gender identity mixed in. It centered on Nitori Shuichi, a feminine-looking junior high school boy, who wanted to be a girl and often cross-dressed outside school. Each episode, the audience witness Nitori interacting with different people around him and dealing with the gradual physical change as he was entering puberty. One of Nitori’s closest friends was Takasuki Yoshino. She wanted to be a boy and often dressed like one. These characters were basically finding who they were and where they would fit into the world.

A large portion of Wandering Son revolved around Nitori’s gender bender play for school festival, in which boys played female characters and girls played male characters. All classmates also participated and provided plenty of opportunities for interesting drama. Since the show focused on gender identity, Nitori’s gender bender play served as a good allegory to the society. We were living in a society in which each gender was given a role to play, a dress to wear, and lines to speak. Those who could not or chose not to conform to the script would face difficulties. Nitori’s play also displayed that these assigned dressed and lines did not have to be fixated on one gender and could be switched as the writers saw fit. We were trapped in our own traps. Nitori wanted to break free from this assigned gender role. And in his play, he could do that in front of the whole school.

I noticed that Wandering Son focused mostly on challenging gender roles rather than sexual orientation. These two terms were different. Gender role referred to behaviors considered normal for specific sex. But sexual orientation was more limited, referring to attraction to another person of specific sex. In the show, Nitori seemed to be attracted to several girls despite wanting to be a girl himself. This raised another interesting point. Gender role and sexual orientation did not have to align. Relationship between two people could take any form and did not have to follow any specific pattern. The same could also be said about love.

How realistic and applicable was Wandering Son?

It was obvious that the anime wanted to keep its tone on the lighter side. Wandering Son’s setting was consequently staged in a rather positive way. I would not say that it was not realistic but I would say that in reality, things could be much worse. Nitori and Takasuki were surrounded by good and open-minded friends. They also had Yuki, a transsexual, as a mentor. Even when Nitori’s gender preference was made known to the whole school, he faced little negative response from other students. Adult characters, especially Nitori’s parents and teachers, could have had much bigger roles in Nitori’s evolution. But the anime apparently tried to limit its scope within the students.

I also could not help wonder about few other things. In the show, Nitori was very good-looking compared to general population. Things might have been different if Nitori was just average looking, or wasn’t as charming a person. In addition, much of gender expression in the anime relied on school uniform. But school uniforms were not universal. Personally, I could easily relate to uniform as representation of gender roles because Thai students were also required to wear them. I didn’t know how Nitori and Takasuki’s troubles with uniforms would affect audience who had never worn them.

Wandering Son was one of the most beautiful anime series I have even seen. Light, water-color-style of art work made the anime looked like sweet, fading, distant memory. It almost felt unreal at times. Character animation was incredible as well. The show progressed in leisurely pace, which was fitting for its overall tone. I liked Wandering Son a lot for its beauty and its challenging idea on gender identity. In conclusion, Wandering Son was a competent anime. It was positive, brave and thought-provoking. Though its pace and style might not be appealing to everyone, I would still recommend this show to every anime fans.

This entry was posted in Series and tagged anime, gender, Wandering Son. Bookmark the permalink.

One response to “Challenging Gender Roles: Review and Discussion of Wandering Son”