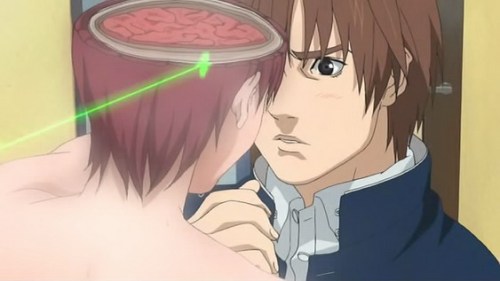 Kei Kurono and Kato Masaru are run over by subway train because they try to help the homeless man who had fallen into the train tracts. At the moment of their deaths, they are transported to an unfurnished apartment. There are several others who had also recently died and gotten transport to the apartment in the same manner. So begins the game of death. Kurono, Kato and the others must hunt and kill dangerous aliens assigned to them within one hour. For each alien they eliminated, they will gain points and when they reach hundred points, they will be able to free themselves from the game. People die a horrible death in this game and their most disgusting sides are revealed when death approaches them.

The story of Gantz is built on these characters and these characters’ unpredictable natures are the best part of Gantz. What I especially like is the protagonist, Kurono. He is not even remotely a good guy. He is just like anyone else who cares mostly about himself. He even thinks that heroic deeds are foolish and he is probably right because in Gantz, heroes suffers the most and decent deeds do not always lead to good outcome. Gantz presents the world in the most pessimistic way; twisted, unfair and full of bad people. I find it quite disturbing at times because sometimes, reality can be unbearable. And if you are looking for some consolation at the end, something to cheer you up, you won’t find it. Gantz is like a deep dark tunnel with no exit at the end. Gantz does not offer any clear conclusion but instead present the reality unaltered and straightly. It ends leaving the viewers wondering what Gantz really are. I think I am not the only one who is not impressed by the anime’s ending.

Technically, Gantz is a disappointment. The constant change in camera angle may be interesting but it cannot conceal the lifeless animation which plagues the entire series. The characters are well drawn but their movements are usually static and stiff. When they talk, only their mouth moves. And there is a good deal of talking in this anime. The lifeless animation is more notable when the editing is bad. The action scenes in which the players fight the aliens are incredibly slow, expanding in several episodes because every now and then some lengthy conversation is inserted right in the middle of a fight. For example, when Nishi is about to be attacked by the Tanaka Alien, the remaining team members spend almost half of that episode discussing and deciding whether Nishi should be saved and who should do it. As the result, the tension is interrupted and the scene becomes very annoying. What’s worst is that this kind of situation happens more than a few times in the series.

Ultimately, Gantz is not a bad anime. It is just weird and dark. The extreme violence, nudity and the pessimistic view of the anime will surely turn several people away. Warning: to any people with any kind of depressive disorder or suicidal idea, avoid Gantz like a plague!
Rating: C+

This entry was posted in Series and tagged Gantz. Bookmark the permalink.