Looking at the World in Different Light: Hyouka anime review 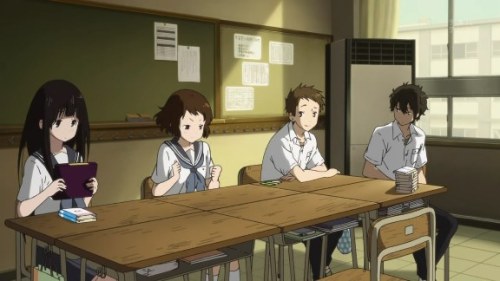 I am afraid that I may have nothing but good things to say about Hyouka. It was an exceptional anime that showcased how good script and direction could turn an apparently conventional high school anime into something extraordinary.

I will be relatively brief in this review since I have already written lengthy post about what I have learned from Hyouka. So, this post will primarily focus on the anime itself and how it managed to garner so much praise from me. 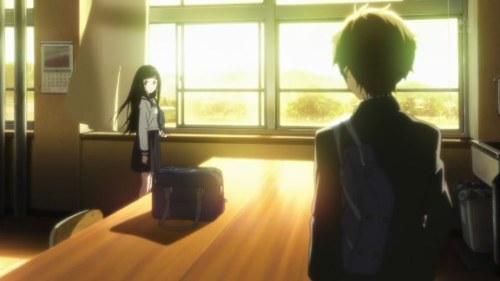 Hyouka started with a Kamiyama high school boy, Oreki, joining Classic Literature Club to save it from getting abolished along with three other friends, Chitanda, Fukube and Ibara. The first major event happened when Chitanda wanted to know the history of Classic Literature Club, the club’s annual anthology and its role to Kanya’s festival. Then the story moved to the hot spring trip and then, the mystery film produced by class 2F. The major story arc revolved around Kanya’s festival which also included smaller subplots related to Manga Club and cooking competition. Valentine’s Day and the traditional New Year’s Day and Doll festival made up the final arc of the anime. 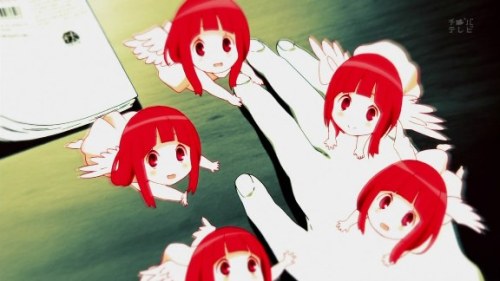 All of these mentioned settings were used so often in anime that if I hadn’t known better, I would have thought they were required by law. Hyouka was full of ordinary, familiar elements. This was where the anime excelled. To my delight, Hyouka was able to infused depth and magic into those ordinary events using brilliantly orchestrated story arc that could also explore the characters as well as the truth behind each mystery. Hyouka showed me that even the most ordinary things had so many stories to tell if only I cared to look or ask questions. Suddenly, everything became new again. I had just discovered a whole new world by simply changing the way I look at things. 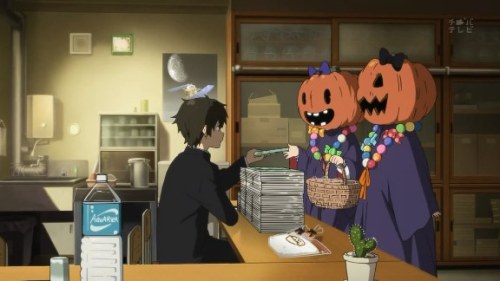 The four main characters in Hyouka were all very interesting. Each had both strengths and defects unique to them. For example, Oreki was very smart, logical and quiet but sometimes lack empathy and social skills. Chitanta, on the other hand, had everything that Oreki lacked but could also be easily driven by emotions. Fukube was a good data collector and manager but he lacked Oreki’s analytic talents. When these people worked together, they made a perfect team and the way they understood each other would probably made them even better overtime. 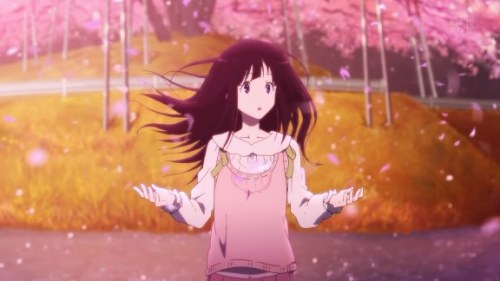 I love how Hyouka looked, with very appealing character design, detailed art direction and nearly flawless animation. Occasional surreal cut scenes were appropriately used to make certain complex points easier to understand or to visualize subjective matters. The ending left some issues concerning the two main characters unresolved but all the individual mysteries were thankfully concluded. I watched this series in marathon-style. Hyouka was unbelievably addictive and inspiring.

Conclusion: Despite its rather plain and conventional looks, Hyouka was smart, beautiful, inspiring and very addictive. It was the kind of show that was propelled by excellent writing and direction, rather than exotic settings, captivating visuals or production value. Watch it now if you haven’t already.

This entry was posted in Series and tagged Hyoka, Hyouka. Bookmark the permalink.

10 responses to “Looking at the World in Different Light: Hyouka anime review”