From what I understood, Fritz Lang’s 1927 silent film ‘Metropolis’ was a classic. Osamu Tezuka’s Metropolis manga was also considered a classic. But the 2001 Metropolis feature anime was arguably not. I think I understand why.

The message that Metropolis tried to convey was not new. In fact, it was the question that had been constantly asked and answered countless of times in science fictions; what was human and what separated us from machine? Struggle between different social classes or between the oppressors and the oppressed was also a common theme in this genre and Metropolis was no exception.

Metropolis set in the near future where robots were part of daily lives. Despite the advanced technology and robots’ existence, the society faced familiar problems like high unemployment rate, poverty, crime and oppressive government. The story followed Kenichi and his uncle who found themselves right in the middle of political turmoil after they accidentally met Tima. Apparently, Time was a robot specially built to control Ziggurat which was a large weaponized structure similar to Babel Tower.

Watching Metropolis, I thought the anime had an epic live action movie feeling to it. The music used in this film was not typical to anime with use of classic western songs and melodies. But what really set Metropolis apart from other anime was the animation. Metropolis was such a visual feast. The background was so detailed and full of movements that I often caught myself observing the background instead of paying attention to the events in the foreground. Every character’s actions was so well animated and accompanied with subtle but realistic details of human behavior. The only other film maker whose works displayed similar quality was Hayao Miyazaki.

Metropolis focused on building the dark futuristic world but did not get very deep into any of its characters. This point may not necessarily be considered its weakness. Some epic stories contained large number of characters who were assigned to play specific roles or represent certain aspect of different ideals. People in Metropolis were largely the same. Tima played the robot with human heart. Kenichi was the idealist who believed that everyone was equal. Duke Red was rather typical villain and tyrant but his adopted son, Rock, was far more interesting as a character with internal conflicts. Political struggles between social classes, plotting and betrayal made up the secondary plotline which eventually paid off in the final sequence of Metropolis. Combined with Tima character arc’s conclusion, the ending of Metropolis, despite its jaw-dropping visuals and soundtracks, was more or less a big commotion. In less experienced hands, it would have completely fallen apart under its own weight. 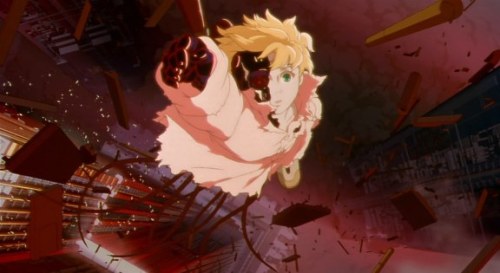 From what I read around the web, I was apparently less excited about Metropolis than other reviewers. The fact that I was an avid sci-fi and fantasy fan who had watched and read lots of stories of similar nature might have blunted my enthusiasm towards this movie. I thought it was a strong film with first class production but it ultimately did not provide anything new to the genre in terms of giving new perspective, social commentary, portrayal of dystopia and storytelling. It was more a homage to other classic science fictions. I would not count it among the best anime but it certainly earned strong recommendation from me, especially those who liked science fictions and fantasy.

This entry was posted in Movies, OVA and others and tagged Metropolis, Osamu Tezuka. Bookmark the permalink.

2 responses to “A Spectacular but Familiar Dystopia: Metropolis anime review”