There are lots of sceneries but only few words in ‘The Garden of Words’: anime review

This anime was only 46 minutes long. But I would not have it any other way. (This review contains spoilers.)

I’ve followed Makoto Shinkai’s works since Voices of a Distant Star was released in 2002. Compared to the distant stars in Voices, the parallel universe in the Place Promised in Our Early Days and the underworld in Children Who Chase Lost Voices, Shinkai’s new film was very down to Earth. This film was more in line with 5 Centimeters per Second, which I loved. And you know what? At this point, I thought the down to Earth style suited him well. 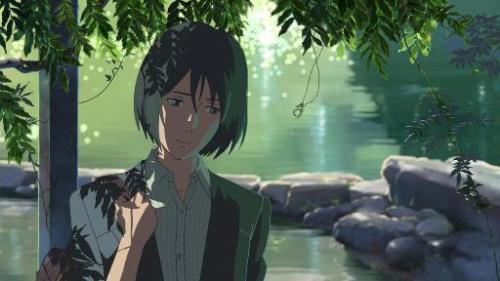 An anime did not have to aim for something big as long as it could deliver what it had set out to do. The Garden of Words was a small and personal story of Akizuki and Yukino. It captured the brief period of time during rainy season that the two spent together in the garden. It was interesting to see that the event in this film could not even be considered significant to both characters. It was not the beginning or the end of a story arc. Nevertheless, The Garden of Words effectively explored Akizuki and Yukino’s current struggle with their own problems using minimal amount of dialogue and screen time.

Akizuki did not do well in school and dreamt of becoming shoemaker. But he was afraid of the future and the possibility of failure, resulting in his emotional meltdown when he learnt that Yukino had been keeping her true identity from him. Yukino was abused at her work place. She tried to avoid going to work and was considering quitting her job. Thus, meeting Akizuki at the garden was her escape. She kept the truth from him so that she could keep this fragile relationship for a little longer.

I also liked how The Garden of Words concluded. It ended with both characters being able to honestly expressed their feelings and come to terms with their problems. But no fairy-tale ending was used. Instead, Akizuki and Yukino went on in their separate lives. The viewers were not told whether Akizuki became shoemaker or whether Yukino was happy with her new job. But that’s not the point of this film. What really mattered was their brief time together in the garden and the anime did wonderful job in displaying those moments.

I have said this before and I will have to say it again. Shinkai’s film was very beautiful. The anime was full of landscape shots depicting both natural and city sceneries. Incredible attention to details was clearly present in every shot. To me, this anime had a way of making regular things looked so impressive. The same quality could be found in almost all of Shinkai’s works. In addition, I often found myself admiring several scenes which utilized interesting camera angle. Combined with detailed animation, the change in camera angle helped made quiet, uneventful scenes much more lively.

Apparently, I have nothing but good things to say about The Garden of Words. I thought it was a wonderful film which contained every element in just the right amount and proportion. It was a small scale story and the anime never tried to be bigger than it actually was. It told us just enough for us to understand the characters and left enough room for our imagination.

In conclusion, watching The Garden of Words was like having a brief, beautiful and bittersweet dream.

This entry was posted in Movies, OVA and others and tagged Kotonoha no Niwa, Makoto Shinkai, The Garden of Words. Bookmark the permalink.

4 responses to “There are lots of sceneries but only few words in ‘The Garden of Words’: anime review”