A world without crime, stress, freewill or dream: discussion and review of Psycho-Pass

Psycho-Pass was such a fascinating show. It was dark, complex, emotional and, most importantly, thought-provoking. Here, I will give my thoughts and criticism towards this anime. Be warned that I will be discussing in depth about many major plot points of Psycho-Pass so there will be spoilers of massive scale!

Psycho-Pass set in the future where people lived in peace under the watchful eyes of Sibyl System. Everyone’s mental status and ability was quantified by psycho-pass and represented as crime coefficient. People who were at risk of committing crime were labeled latent criminal and were captured by agents from Public Safety Bureau. The story was told through the eyes of Akane Tsunemori who was newly appointed as an inspector. Other main players included Shinya Kogami who worked as Akane’s subordinate, Shogo Makishima who terrorized the peaceful city with the crime he orchestrated and Ginoza who was the senior inspector.

Shogo Makishima: the idealist, the psychopath or just a lonesome outcast?

Akane was the one showing most prominent development from a naive young woman to a full-fledged detective. And Kogami was probably the most ‘bad-ass’ character of the show. But Makishima was arguably the most fascinating. Of course, he’s the main villain and he was trying to bring the system down. I must admit that I agreed with him to a certain point especially when it came to the Sibyl System’s defects. And though I could not fully grasp all the philosophical references Makishima made, some of them did sound convincing. Nevertheless, the way he did things was quite sickening and would have cause great damage that it might not be worth doing. Makishima was probably a mixture of idealist, revolutionist, terrorist and a straight-forward psychopath. Not much was revealed about him except from Kogami’s speculation and from his ‘work’.  But Kogami gave some interesting insights about Makishima. He speculated that Makishima felt like he was an outcast from society when he learned that Sibyl could not evaluate his crime coefficient. In the end, all that could be said about him was that he was a complex character. His origin, motivation and believes were up for the viewers’ interpretation.

Do you agree with inspector Akane Tsunemori?

On the opposite side from Makishima, we had Akane. There was a reason behind her ability to maintain low level of crime coefficient in any situation or pressure. She naturally accepted the system she was in and always found the positive sides of it to hold on to. Akane was visibly disturbed by the true nature of Sibyl System but she decided against destroying it because she prioritized the peace that the system provided to the society over its moral ambiguities and imperfections. Her choice in preserving the system left bitter taste in my mouth but I could see her logic. If Sibyl were to be shut down immediately, the society would collapse and many people would be dead (we saw glimpses of this in the ‘helmet incident’). I agreed with her that change was needed but change should come gradually to minimize the casualty.

What do I think about the Sybil System?

It was revealed that the Sibyl System which monitored every people in the city and their individual stress level was actually made up of a bunch of human brains. These brains were mostly harvested from people who had some abilities that the Sibyl System could not control, some of which were criminals who could not be detected using crime coefficient. The fact that this almost perfect system was the product of human brains rather than artificial intelligence was a testament to human’s unimaginable potential. It meant that humans had potentials to do great things. Akane also believed in this judging by her saying that one day someone would ‘pull the plug’ of Sibyl and human would no longer need it to maintain peaceful society.

For me, I could not imagine living a life governed by Sibyl System. Not only did the Sibyl determine who were at high risk of committing crime, it also determined what kind of job you are fitted to do. There was no room for any kind of risk taking or trials and error action. There was no surprise in life and there was no reason to dream. Freewill became obsolete. Having you life planned by the system could reduce stress and thus, your crime coefficient remained low. But seriously, without those stressful things like freewill, dream, luck and surprises, there was no reason to live. Absolutely stress-free life is not living. Quite impressively, the anime tackled this topic by showing people who suffered from debilitating disease that was caused by prolonged stress-free living or intensive stress-reducing therapy. 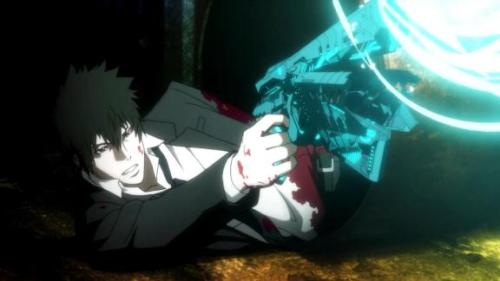 The two competing themes of Psycho-Pass

It was not wrong for a show to try to deliver multiple themes or challenge the viewers in several ideas at once. In fact, many anime series had successfully done so. In Psycho-Pass, there were two principal themes that went hand in hand with each other. First, the anime provided multiple aspects of the Sibyl System and exploration of its strength and flaws. Makishima played major role in this as he constantly tried to exploit the system’s loopholes through the crimes he orchestrated. This theme came to the spotlight when the true nature of Sibyl System was revealed but it was almost entirely dropped during the last few episodes. The second theme was the crime drama part which was mostly seen in the first half of the series. Every murder case was cleverly written and staged. Addition of sci-fi elements also helped set the show aside from other crime dramas. The game of cat and mouse between Kogami and Makishima through the eyes of Akane was nothing short of mesmerizing. Plus, the show sporadically inserted interesting questions regarding justice and law enforcement to the viewers. 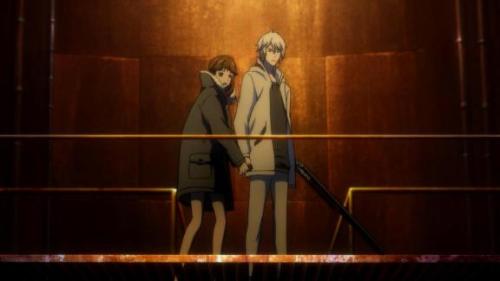 Both themes were very captivating and were well executed. But unfortunately, the two themes competed with each other as the anime was wrapping up. Somehow a balance was lost in the commotion. The final few episodes were focused on the showdown between Kogami and Makishima in an isolated case related to super-oats. The introduction of super-oats case interrupted the pacing of the show. The theme about Sibyl System was instantly pushed to the background. Despite the glitch in the pacing, the final few episodes did not go to waste. In terms of bringing the character arcs to a close, the anime actually ended on a high note, in my opinion. Akane found her true potential as a detective and made her own stand in the Sibyl System. Kogami ultimately followed his own instinct and his own fashion of justice despite Akane’s protest. Ginoza found his own place in the system and come to terms with his own past ordeals. And Makishima…well, he died. If you asked me whether I was satisfied with the ending of Psycho-Pass, I would say that I was. Even though the anime did not give clear conclusion on the large scale, it wrapped up the smaller parts, the character arcs in particular, really nicely.

I absolutely loved the second opening credits of this show and the song ‘Out of Control’. The animation was great and the hand-to-hand combat sequence was well choreographed and thrilling. Though I was a bit annoyed by the occasional use of electronic music, the original score was fair overall.

Conclusion: I guess I did not criticize the actual anime as much as I usually do in my reviews. I always have soft spot for sci-fi or fantasy mixed with heavy drama. Psycho-Pass was everything I could have hoped for in a sci-fi, drama and action anime. And I was fascinated by the multiple layers of social commentary and thought-provoking questions that were put into the anime. Of course, there were glitches or the time when the series threatened to fall due to its own weight. But the ultimate result was still impressive. The anime was a good brain exercise and great emotional experience. Do not let anything stop you from watching this show!

This entry was posted in Series and tagged Psycho-Pass. Bookmark the permalink.

14 responses to “A world without crime, stress, freewill or dream: discussion and review of Psycho-Pass”