Review: Tokyo Magnitude 8.0 comes to me as a big surprise. I was expecting a giant earthquake that wiped the city out. I expected to see a dark, post-apocalyptic world filled with desperate human struggling to survive and killing each other. I was fatally wrong and the anime reminded me how to look at the world in less pessimistic way and how decent human can be in the time of crisis.

To easily gain the viewers’ sympathy, the anime follows the journey two children, Mirai, and her little brother, Yuuki, after a big earthquake strikes Tokyo. Mirai and Yuuki are visiting a robot festival when the disaster strikes so they are separated from their family. The eleven episodes cover the two protagonists’ walk home.

As I’ve said in the first paragraph, there are many unexpected things from the show. First and foremost, the earthquake is not as catastrophic as I’ve expected (obviously, I watch too many Hollywood disaster movies). In this anime, when the disaster strikes, the birds fly, the ground shakes, glasses break and people fall to the ground. There’s no building collapses, no explosion, let alone volcanic eruption or giant tsunami. But instead of making me bored, it makes me believe that what happens in the show is definitely within the realm of possibility, not a dream of someone obsessed with destruction or CG effects. What’s more, the disaster scene is extremely brief, confining to the last few minutes of the first episode which means that the quake is actually not the main point of the show but is only the beginning.

Another thing that I find unexpected is the anime’s optimistic view towards human reaction to critical situations. Mari is the most obvious example. She helps the children and cares for them like her own family and though there are certain moments that she illogically puts Mirai and Yuuki before her own daughter, her action is admirable. Mari is questioned several times during the show why she helps the two children and she gives unclear answer. At first it sounds strange but I later realize what the anime is trying to say; helping other people does not need firm reason to back it up, it’s just the right thing to do.

All along the journey home, the three meet many people who also suffer great loss but they choose to deal with their pain by helping others. Even the government officials and soldiers, who usually are the least reliable group in crisis, appear to be really generous and helpful. As the result, Tokyo Magnitude 8.0 makes me feel warm and secure like I’ve never experienced in other disaster stories. There’s always help when you need it, there’s always hope as long as you don’t give up, even if the world ends, you are not alone.

Since the entire show is just a long walk home, the characters must be extremely well portrayed in order to fill up all the time after the disaster. Fortunately, the creators seem to know this as well. From the very first episode, lots of details about the two lead characters are explored (at one point, I thought the earthquake may never occur at all). The personalities of Mirai and Yuuki and their family problems are subtly presented using common events in daily life and when the earthquakes strikes, all the viewers can do is to cheer for them. 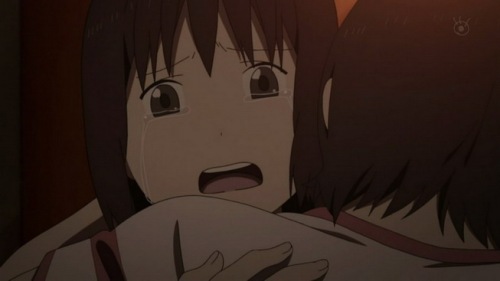 The anime’s finale is my last surprise. As far as I know, the finale instantly became hot topic of discussion among those who’d seen it after the show finished its airing. [Major spoilers alert!] In the last three episodes, Yuuki dies and the show seems to shift its nature from realistic drama to supernatural drama. If this were true then I’d say it could be considered the show’s biggest flaw. But personally, I think the appearance of Yuuki is not real but is a way to display Mirai’s post traumatic stress reaction or her way of coping with bad news. Since the show is told through Mirai’s view, I believe my assumption is pretty sound. Putting the controversial matters aside, the final episode gives me one of the saddest ending I’ve ever seen thanks to the excellently portrayed characters, the masterful editing and the very realistic animation. When Mirai cries, her facial expression and the motion of the tears looks so real! I could feel her pain, really.

The animation is very impressive with lively color and clean looking drawing. Although I’d have preferred grander music for several of the show’s big moments, the soundtracks work just fine for me. Conclusion: Throw all your speculation and expectation away and watch Tokyo Magnitude 8.0 with clear mind. You will not regret it.
Rating: A

This entry was posted in Series and tagged Tokyo Magnitude 8.0. Bookmark the permalink.