After the first part in which I discussed about several household illnesses, the second part will raise more health problems expanding from mental to structural disorders. Enjoy reading and make sure you read the first part as well!

The parents are always in poor health.

Surely everyone must have seen this disease so many times but never really cared much about it. I always wonder why most of the anime hero’s or villain’s parents often die. Their death and suffering is important because the hero needs a reason to be a hero and the villain needs painful background to garner sympathy from the anime audience.

This condition is defined by prolonged generalized fatigue and wasting in combination with one or more of the following symptoms; fever, nausea, vomiting, anorexia, exercise intolerance or cough. Occasionally, confusion, delusion and fainting also occur. The most distinguished and puzzling nature of this disease is that it manifests only in adults who already have kids. The parents who are in the high risk group are the parents of the protagonist or the main villain of the anime.

In reality, patients with these symptoms will need to be tested and examined thoroughly and extensively because numerous diseases can cause these symptoms. But in anime, we usually see these sickly parents stay home or in the hospital. They often wear oxygen supplement device like cannula or oxygen mask on their faces for no clear reason. I think I’ll call this condition ‘Anime Parents Syndrome’.

This is a psychiatric disorder characterized by disruption of identity, awareness and memory. It is actually a pretty rare disorder in reality but shockingly very common in literatures/movies/anime that one might suspect it is contagious. Dissociative disorder can be classified into 5 types but the most popular type is probable ‘dissociative personality disorder’ or multiple personality disorder. Since this condition is also common in other kind of media, the details have already been explored somewhere else. You can find several examples and details in Wikipedia entry here.

LeLouche's hands are not normal, neither does his stature

Tall Stature and Hyper-flexibility of Joints

Being tall is normal but being disproportionately tall is not. Tall Stature is frequently found in Shoujo-oriented anime. The characters often look extremely thin with unnaturally long limbs and fingers. Plus, in several shows like Code Geass, the characters also have abnormally flexible joints.

Several diseases can lead to tall stature, namely Gigantism in which the brain produces too much Growth Hormone. But when the patient is tall, thin and possesses long limbs and fingers (Arachnodactyly or Spider fingers) and hyper-flexibility of joints (demonstrated in above image), a diagnosis of certain genetic disorder called ‘Marfan syndrome‘ is possible! 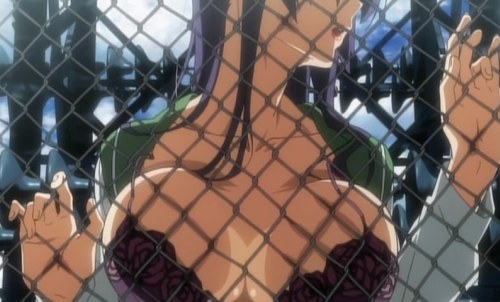 Despite the potential of causing back pain, having big boobs is a generally well-like condition among anime fans. In reality, abnormally large breasts, especially when they are not symmetrical can be an alarming sign of growing tumor or cancer. But in anime, female characters have very wide range of breast size; from non-existent to phenomenally huge even in very young age. In fact, some are so large that they can be used as weapons!

What’s more, normal breast is composed of adipose tissue (fat) which is soft and the glandular tissue which is firmer in consistency. Females in reproductive age usually have more glandular part than in older age so their breasts should not be wholly soft like the anime usually suggest they are. Umm, I don’t know…you tell me!

So the second part ends here but I am not done yet. The third part will focus on trauma and injuries. Please stay tuned!

36 responses to “Common Health Problems in Anime (Part 2): some mental disorder and boobs!”