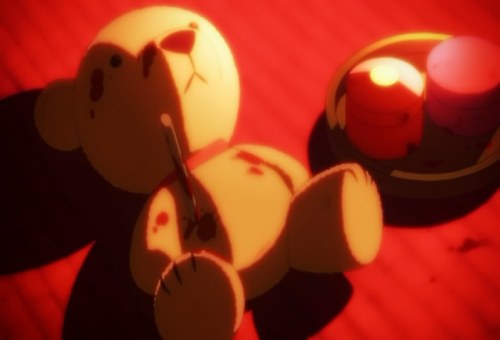 Review: The Remaining Sense of Pain benefits immensely from what the previous two episodes have built. The viewers have gotten accustomed with the universe of this series and the main characters have been properly introduced. This is the right time to expand the plot, give the viewer some hints of the bigger picture. It’s time for some juicy action!

Asagami Fujino is the star of this episode. She has a strange condition that makes her insensitive to pain. The story opens with the explicit rape scene that will later trigger the series of murders in which the victims’ bodies and limbs are bizarrely twisted. This is so far the most entertaining episode. The story moves forward quickly and not distracted by lengthy dialogue. New revelation pops up at every turn of events and the episode finale provides such spectacular battle scenes between Fujino and Shiki.

As always, the animation and sound remain one of the most distinguished quality of the anime overall. I especially love the use of slow sad chanting music during action scenes which helps add unexpected depth and emotion to the sequence without using a single word.

Unlike the previous two episodes, Remaining Sense of Pain ends pretty neatly and does not leave any loose ends. For the first time, this anime is a success both as an individual episode and as part of the series.

Note: also read my short review on episode 1 and 2 by using the ‘browse’ page. Thanks.

This entry was posted in OVA and others and tagged Kara no Kyokai, Remaining Sense of Pain, The Garden of Sinners. Bookmark the permalink.