Reaching the second round: a discussion on the match’s complexity and controversy

Canne’s anime review blog has just advanced to the second round of the Aniblog Tourney! As many of you might have already noticed, my match against Colony Drop was quite interesting and exciting (at least to me). In fact, it was almost exceptional. In this post, I’ll talk about the noteworthy facts and try to understand what really happened back then.

So before I dive into several interesting details of the post, I would like to thank everyone for your kind support and, of course, your votes which carried me and this blog to the second round despite the extremely tough competitor. Thank you!

The honest criticism from the readers and visitors can be both scary and encouraging. So far, the reactions had been generally (and surprisingly) positive. Several of the good responses came from closed friends and fellow bloggers like Yi, foshizze, Glo, Velore, zzeroparticle, Aorii, aquabluesweater, Kitsune, Mefloraine, Janette and many others. A good number of people, myself included, thought that my blog was decent. I think it’s a good sign that so far I have not received any extremely negative criticism…or maybe I didn’t look hard enough.

Where did these 479 votes come from?

The speculations on what really happened

Based on the said interesting facts, I have been giving them some thoughts and came up with a few speculations that might explain what exactly happened.

Ultimately, I think several factors contributed to the result of this match and surely, many people voted for me because I did something right. Despite all the doubts and questions, I was really happy and I did gain a lot of new friends and visitors during the course of the race. 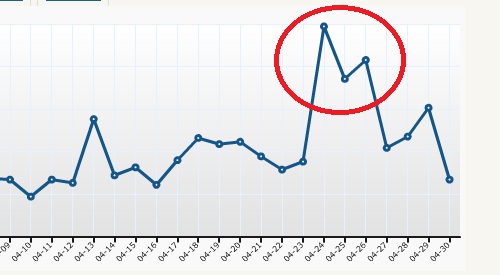 My blog's hits skyrocketed...for a few days at least

I am facing Wakaranai in the second round. I hope that I will continue to have your supports and for my new readers, if you like what I am doing, please vote for me!

This entry was posted in Articles, Talks and tagged Aniblog Tourney. Bookmark the permalink.

34 responses to “Reaching the second round: a discussion on the match’s complexity and controversy”