The origin of me as a sci-fi fanatic (part 1) 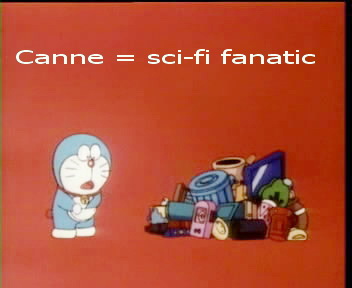 Just in case you don’t know, I am a long time, loyal sci-fi fan. I watch sci-fi anime regularly, I am fascinated by sci-fi movies even the bad ones. I read sci-fi novels until I fall asleep and I dream of another, distant world. During the last weekend, I dug through my old anime collection and came upon an old disc for Doraemon: Nobita and the Robot Army. I remember I first watched it when I was only five or six years old. I recall I loved it a lot but never thought about the reason behind my passion, not to mention how influential to my later life this movie has become.

Watching it again after so many years, it’s like going back through time and one thing dawned on me; this is where it all began. This anime surprisingly contains almost all features commonly found in sci-fi flicks. It was my earliest exposure to science fiction genre and I now know why I have such insatiable passion for sci-fi nowadays. 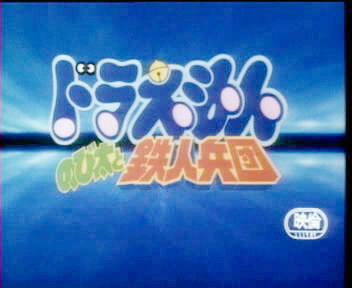 this is where it all began

Doraemon: Nobita and the Robot Army (aka Nobita and the Platoon of Iron Men) is the seventh Doraemon feature film released in 1986. The story begins when Nobita accidentally discovers a giant robot’s parts in the North Pole. He, with Doraemon’s help, brings the robot home and rebuilds it in the mirror world. None of them know that the robot is a deadly weapon sent to Earth in a scheme of world destruction. Later a mysterious girl, Lilulu, comes looking for the robot and Doraemon and friends learn about the invasion of the robot army. They eventually join forces and fight to pretect the Earth.

In this post, I will go into the details of the ten amazing yet common features of Sci-fi genre found in Doraemon: Nobita and the Robot Army and pay homage to this probably forgotten anime that has become part of my sci-fi fandom. 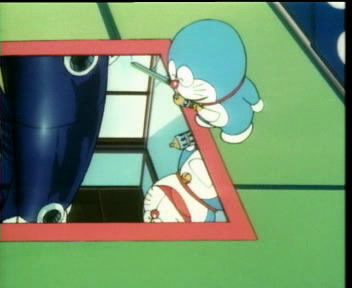 the other side of the mirror

You can call it a kid’s version of parallel universe because Doraemon presents it in a way anyone can understand, no technical terms and no headache-inducing theory. It’s a world in the mirror. What happens there stays there. The mirror is cleverly used during the Robot’s invasion to lured them into the parallel world and thus, preventing them from invading our real world. 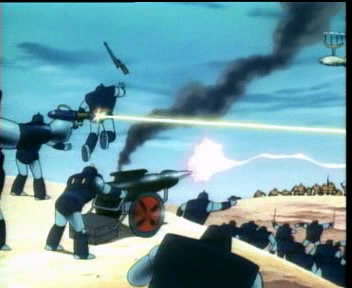 a familiar portrayal of dystopia

Doraemon is anything but a pessimistic anime but the idea about dystopia is well implied within the conversations and the background story concerning the invading robot army. The planet from which the army comes from is ruled by AI originally created by human trying to build a utopia but instead ending up creating tyranny robots. Though the anime never directly shows what the planet is like at the present time, one can easily assume that the human on that planet is no more. 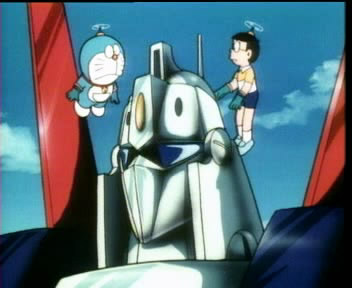 an ideal friend in hard times

Sanda Claus appears solely to please kids. Nobita accidentally find the giant mecha at the North Pole out of pure luck. Kids cannot help feeling jealous about Nobita’s new big toy because this is like a dream comes true. The mecha is an obvious homage to other, greater mecha anime at that time. 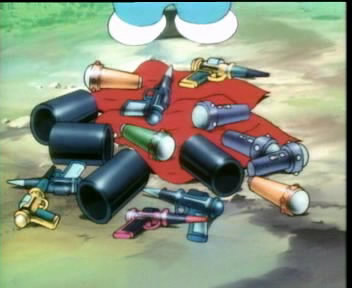 thanks to these hamless looking toys, the world is safe!

There isn’t much to discuss about advanced technology especially for those who know Doraemon. Doraemon seems to have wondrous gadgets for any occasion even for the most trivial things but curiously, he often fails to bring them out in the time of crisis. Another note worthy thing about technology is the robot army’s using time warp to transport Sanda Claus’s parts to earth.

Wait! This post doesn’t end here but it apparently gets too long. There are six more features to discuss so I decide to split this post into part 1 and part 2. Click here for part 2!