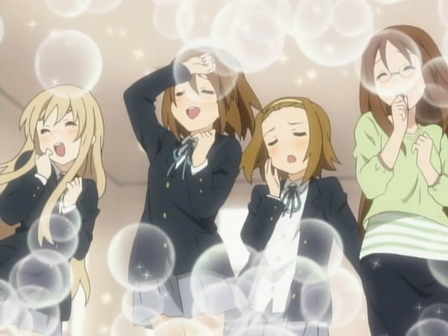 Title: K-On!
Genre: comedy, drama, musical
Released date: April 3, 2009 – June 26, 2009
Episode: 13
Director: Naoko Yamada
Animated by: Kyoto Animation
Comment: K-On! is the story of four high school girls, Yui, Mio, Mugi and Ritsu who form the light music club. There isn’t much of the plot to describe since there isn’t one. The show depends mostly on characters and small familiar events that occur in everyday life such as doing club activity, going on vacation or throwing a Christmas party. It is certainly fun watching K-On! but I doubt I will gain anything else from it.

K-On! is generally light in tone and full of sense of humor. The use of chibi character and surreal imaging really helps. There are plenty of small details that are artfully presented that will definitely put smiles on the viewers’ faces. The characterization for the four main characters is, in my opinion, the greatest achievement of the show. Without there unique personalities and their interaction, K-On! would be utterly dull. Sawako sensei is exceptionally funny; I can’t stop laughing in all her scenes (especially the scene that she goes berserk, rushing to the music room to cover the embarrassing evidence of her wild past). Another notable thing about this anime is that it always stays close to familiar events that most people must have experienced before. As the result, the show is accessible and appealing to most people, not just anime fans.

But from the opposite point of view, without the humor, the anime crashed and burned because it has nothing else to offer. The story progresses very slowly and some episode lacks the storyline completely. For example, the fourth episode in which the girls have a training camp presents nothing that matters at all. There’s just the girls playing around the beach and the campfire and somehow just before they leave, they miraculously improve their performance. This point leads to another thing that disturbs me. For the most part of the show, I only hear about the light music club’s ultimate goal of playing for the school festival or performing at the Budokan but all they do is fooling around, teasing with each other or eating cakes. This is not what one should do to achieve one’s dream. They are supposed to work a little harder in order to really improve their performance, not to mention about being professional musician. Mugi’s rich family is another tool to provide easy solution to every problem the girls has to face like when Mugi helps Yui buy the expensive guitar she cannot afford. Life is not that easy but K-On! may lead the viewers to think otherwise. I think this is the biggest mistake for K-On!

Speaking of Yui, she is cute and funny but I cannot help feeling that she truly is uninspired, unmotivated, dependent and almost good-for-nothing. She is the kind of girl that is fun to watch but hard to deal with. If she were my friend, I’d have been miserable because I’d have to drag her along everywhere and help her do everything.

K-On! never takes itself seriously so it severely lacks substance, not to mention character development or creative ideas. Nevertheless, it succeeds on one aspect which, for many people, may be the most important; it is fun to watch. In my opinion, the show is like candy. It tastes nice but cannot fill the stomach. It’s sad that despite all the laughter the show gave me, I just cannot rate it any higher.
Rating: C

This entry was posted in Series and tagged K-ON. Bookmark the permalink.